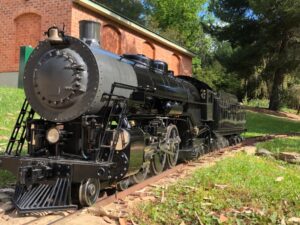 In France, where the type was first used,this 4-6-4 engine was known as the Baltic, while it became known as the Hudson in most of North America and in Australia.

The first 4-6-4 in the United States , the J-1 of the New York Central Railroad, was built in 1927 to the railroad’s design by the American Locomotive Company (Alco). There the type was named the “Hudson” after the Hudson River.

Seventy R class 4-6-4 Hudson tender locomotives, the only class of this configuration in Australia and built by North British Locomotive Company, were introduced by the Victorian Railways in 1951 for mainline express passenger operations.

Common components:
This engine shares the components that the other locomotives use.